Low-Alcohol beer: how to answer this global trend?

The global beer market, both in volume and value, has seen great expansion for many years. This growth in demand has seen both a rise in the number of breweries and an expansion in beer style diversity. Among these styles, one of them is emerging significantly around the world: no and low-alcohol beers (NAB-LAB).

A bigger market provides a larger consumer panel with different expectations and desires. Low-alcohol beers emerged to meet a need which only existed moderately in the past. Indeed, an entire segment of consumers has grown with an education around well-being, the “well-eating” and now the “well-drinking”. Modern beer drinkers pay special attention to the product’s caloric intake, have an increased knowledge about a product’s health benefits and the desire to consume locally if possible. While the third point is not always substantiated, low Alcohol answers the two first consumption trends: in a consumer mindset, less alcohol implies less sugar and a better health benefit, and generally alcohol always has a negative connotation. All other factors being equal, especially taste and price, there is no doubt that for this kind of consumer low-alcohol beer is a viable alternative to “classic beer”. Generally, we can bring this low-alcohol trend closer to the “free” trends, such as additive-free, gluten-free and alcohol-free.

To these new consumers, we must add those who’ve always had this “need” for a low-alcoholic beer. For health reasons, like pregnant women for example or for a religious conviction. Although this need always existed, it has strengthened during the last few years, due to the fact that beer is now a societal phenomenon. Consumers, by wiling to be part of the society, wants to consume trendy product. Therefore, the product must adapt itself to the consumer and give him this possibility. This is the reason behind the rise of low-alcohol beers.

Although demand is quite recent, we must go back much further to find the origin of low-alcohol beers. It’s the year 1920, in the USA and it’s the Prohibition: this constitution signs the interdiction to produce, transport, import and sell alcohol in order to reduce criminality and corruption in the country. Taking place from 1919 to 1933, this law pushes breweries to reinvent themselves to survive. Low-alcoholic beers were born!

Although the style emerged under constraint, nowadays it’s really the brewer’s choice to produce no or low-alcoholic beers to answer the growing demand. When going for this particular style, the question of the process arises: how does a brewer significantly reduce alcohol quantity without changing production process? Because Yeast is the key for alcohol production, it was our duty to help brewers in this task. We, at Fermentis, have been solicited to develop a solution.

Firstly, we had to do the work of screening among all the strains we know, a long-term task to select the ones that could match our research criterion: technical criteria but also sensorial criteria to answer to brewers need. Simon Jeanpierre, Technical Sales Support Manager Asia Pacific, tells us more about it: “To perform our first screening, our target was to list Saccharomyces and non-Saccharomyces strains able to produce only little alcohol. To narrow this list, we looked at microorganisms also able to reproduce as much as possible the expected beer flavours, as we traditionally know. This naturally led us to maltose-negative strain unable to ferment complex sugars (i.e. polymers of glucose), with yet a strong ability to produce higher alcohols, Esters and phenols, participating into the beer aromas.”

To understand our decision to steer our choice towards maltose-negative strains, you just have to look at the classical composition of a beer wort on the schema here below. Unlike the other strains of Fermentis range, maltose-negative strains only have the capacity to ferment glucose (DP1, single sugar chains), the equivalent of 10 to 15% of total sugars in wort.  Less fermentable sugars imply a lower alcohol production in the final beer. 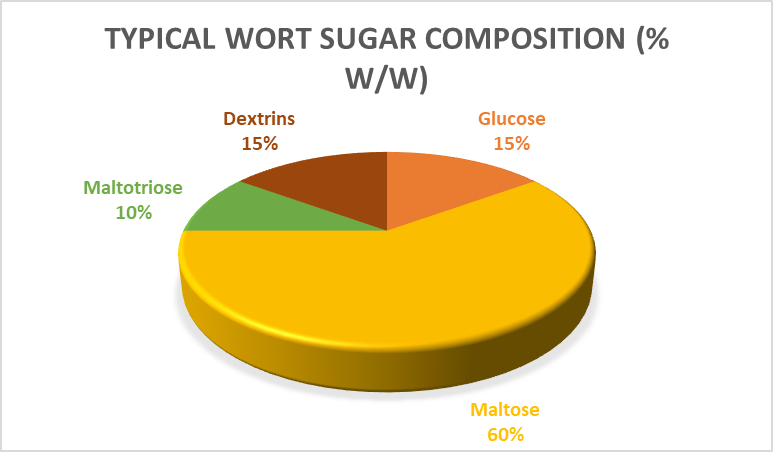 This done, the next step was to verify our hypothesis with a trial protocol, it’s Simon who explains it: “We started with the beginning: a recipe. This recipe had to produce a classic wort at a standard density of 15, 10, 8 and 6°P (1061, 1040, 1032 and 1024 in specific density) fermented at 20°C (68°F). It was then fermented with all screened strains and accurately followed-up on sugar consumption and alcohol production. A tasting with a panel of experts finally allowed us to choose the winning strain that would not only perform well in low alcohol production but also provide essential aromas expected in the beer during a proper fermentation.”  Moreover, this yeast produces “clean beers” without off-flavours that are commonly found in NAB.

The strain we have selected after duplicating this trial protocol many times is a Saccharomyces chevalieri that we named SafBrew™ LA-01, LA simply for Low Alcohol.  We chose this strain because it showed excellent results during our fermentation trials as demonstrated hereunder. For every tested density, the fermentation reached its plateau after 60hrs for an alcohol level between 0,4 and 1,2% ABV, corresponding to an apparent degree of fermentation about 14%. We have noted a positive correlation between final degree of alcohol and wort initial density, so we are able to say that an initial density of 7°P (1028 in specific density) is ideal to reach 0,5% ABV which is the maximum alcohol level tolerated in many countries to write “No-alcoholic beer” on the label. 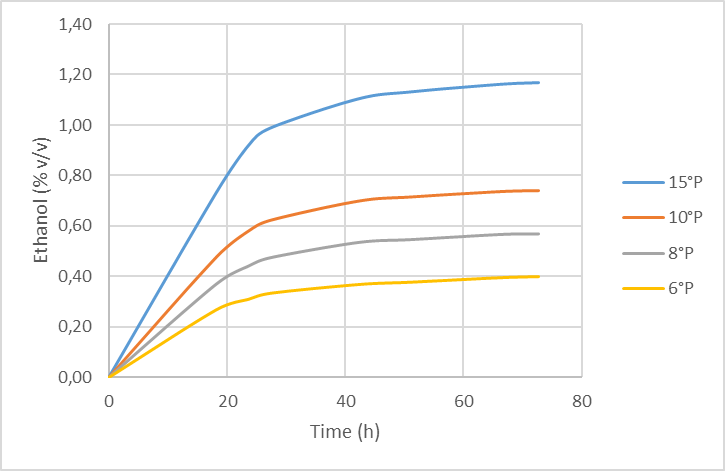 As previously presented, this strain is maltose-negative, it only consumes simple sugars (glucose, fructose, sucrose) leaving behind the maltose and other complex sugars such as maltotriose and dextrins. Logically, we find more residual sugars in our low-alcoholic beer. The below graph confirms that in numbers, DP2 means disaccharides which are mainly maltose and DP3 means trisaccharides which are mainly maltotriose. 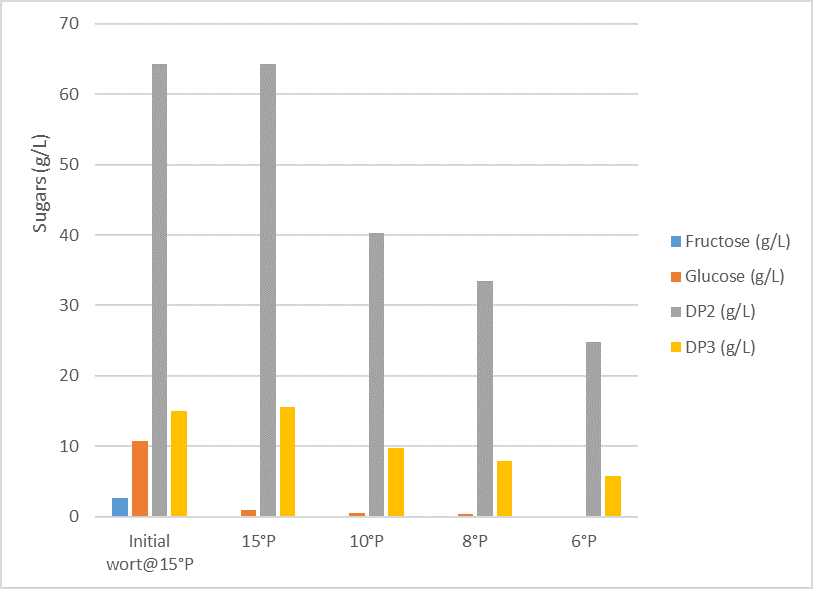 We have seen that in purely scientific terms, SafBrew™ LA-01 allows us to brew a NAB-LAB, but what about the sensory profile of the beer itself? This is a legitimate question because such a high level of residual maltose doesn’t exist in “classic” beers. Maltose is a sugar able to bring a clean sweetness. In the majority of beers, it doesn’t have the chance to express its potential because it’s turned into alcohol and CO2 by yeasts. Therefore, it’s the alcohol which will mainly bring the roundness and sweetness perception in the mouth (or to Mouthfeel). In a NAB-LAB, residual maltose can play this role because alcohol is present in small quantity only. However, if sweetness level in your final beer worries you, it’s easy to balance it with several brewing tools as Simon explains to us: “Bitterness level plays a great role and anything above 15 IBU for 0.5% ABV is a good target to balance the sweetness level. Increasing your water hardness gives a firmer bitterness too. On the cereal side, limit the use of caramel malts and the sweet flavour associated with them. To finish balancing the bill, there is of course the acidity. You can either pre-acidify your wort prior to fermentation or use greater carbonation and its associated carbonic acid which also propels aroma.”

Another important thing when we are talking about sensory profile is the fact that SafBrew™ LA-01 is a POF + strain. By being classified positive (+), SafBrew™ LA-01 owns a gene which expresses the POF character, POF meaning phenolic off flavour. In other words, this yeast has a specific enzyme that decarboxylates phenolic acids, like ferulic acid and coumaric acid, present in wort and thus producing respectively the flavour-active compounds 4VG and 4VP. These compounds contribute to spicy, clove-like flavours which, depending on the concentration, may produce a spicy and complex character. Note that in a NAB-LABs brewed with SafBrew™ LA-01, this phenolic side will be very light as described by Simon: “From a sensory perspective we really enjoyed the slight phenolic expression it develops. Keep in mind that the expression of a POF character depends on the amount of ferulic acid you have in your malt. In a NAB-LAB, you will therefore only have a limited expression from the recommended lower amount of malt”.

Last but not the least, the pasteurization topic. Pasteurization is a technique invented in 1865 by Louis Pasteur for food conservation by killing all living microorganisms in the product. The process is theoretically quite simple: you heat the product between 62°C to 88°C (144 to 191°F) before brutally cooling it. Pasteurization is not popular in the craft beer industry because it’s linked to standardization of the product or because, with this process, the beer is not really “alive” anymore and will not evolve over time.

But in regard to our recommendation for NAB-LAB, pasteurization is mandatory. You are certainly aware of how much yeasts and microorganisms like sugars and how much residual sugars we still have in a NAB-LAB at the end of fermentation. If a pasteurization is not done, any living microorganisms could eventually ferment maltose and totally alter the beer or even create overcarbonation in bottles, which could be dangerous. Different Pasteurization techniques exist such as tunnel pasteurization, whichever technique is chosen, Simon explains how much you have to pasteurize: “As soon as you have reached your max ADF of 13-15%, it will be important to inhibit eventual living friends from further fermenting. We studied different cross-contamination levels with Saccharomyces cerevisiae and observed a minimum safe limit of 80 PU in order to prevent growth in a brew fermented with SafBrew™ LA-01. We recommend the range of 80-120 PU.” PU signifies Pasteur Units, in terms of affect, one PU is equivalent to heating to 60°C in one minute. To calculate your pasteurization level, the formula is the following:

Where t is the time you heat in minutes and T is the temperature in °C.

A true alternative to pasteurization doesn’t really exist, it remains the best technique for ensuring optimal microbiology of a beer. We know that this technique is not accessible to every brewer and as Simon explains, we are constantly looking for solutions for small breweries: “Fermentis is aware that such equipment can be limited to big scale breweries. This is why we are working on alternatives to offer craft brewers the best performance in fermenting flavourful NAB-LAB with our SafBrew™ LA-01. Such alternatives exist through intrusive (biotechnology) or non-intrusive methods (cool chain). Feel free to reach out to us to learn more and receive tailor-made advice on your NAB-LAB fermentation management and hygiene practices.” 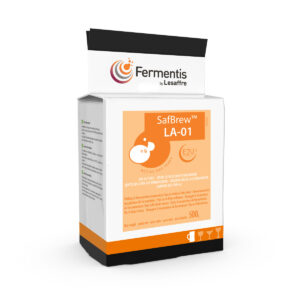 The ideal yeast for low- and no-alcohol beers

Visite the product page here
Back to expert insights