SafSour™ LP 652 – a bacteria for your Sour beers

Fermentis is pleased to present the first bacteria of its range to help brewers create sour beer. This homofermentative lactic acid bacteria called SafSour™ LP 652 has been specifically selected by Fermentis for its ability to acidify beer wort as well as to provide subtle fruity and citrusy notes. Sour beers have gained in popularity over the years; spreading out of Europe through the USA into the world…Spontaneous fermentation and subsequent blending, or using indigenous barrel flora, is not easily achieved and requires much expertise and involves some risks. Kettle souring is a rather easy and effective way for brewers to produce sour beers; hence this process has developed rapidly on the beer industry scene. We realized we had a void in the area of sour beers development and started the journey of developing first the bacteria required for kettle souring. Our first microorganism in this respect is the SafSour™ LP 652, a homofermentative Lactobacillus plantarum producing primarily lactic acid. It is fairly fast and thermotolerant and has been designed to acidify wort down to desirable pH levels for drinkable and subtle aromatic sours; leaving the possibility to develop a wide range of profiles depending on the raw materials and subsequent primary fermentation.

SafSour LP 652 is ideal for kettle sour beer recipes. Kettle souring is the most popular process to acidify a wort. It consists of a non-hopped wort acidification after a sterilization and a cooling. Indeed, iso alpha acids present in hops would inhibit bacteria’s growth and its metabolism if you pitch it after hop additions.

As many of the Fermentis products, SafSour™ LP 652 is certified E2U™, meaning that you can pitch the bacteria directly into non-hopped wort without any prior step of rehydration. It simplifies your work and it guarantees you the same results in terms of acidification time and organoleptic profile [when compared to prior rehydration].  Note it is essential to proceed with a non-hopped wort as Iso-alpha acids present in hops would inhibit bacterial growth and its metabolism if you pitch it after hop addition.Fermentis recommends to pitch 10 g/hL of the bacteria in a cooled 12°P wort within a temperature range of 30 to 40° C [86 – 104°F]. The final pH reached in these conditions will be between 3.2 and 3.6. The graph bellow shows that at a higher pitching rate, lactic fermentation will go faster and reach a lower final pH.

Indeed, brewers may want to play with the pitching rate and or the worth density to reach a different pH or modify the lactic fermentation time 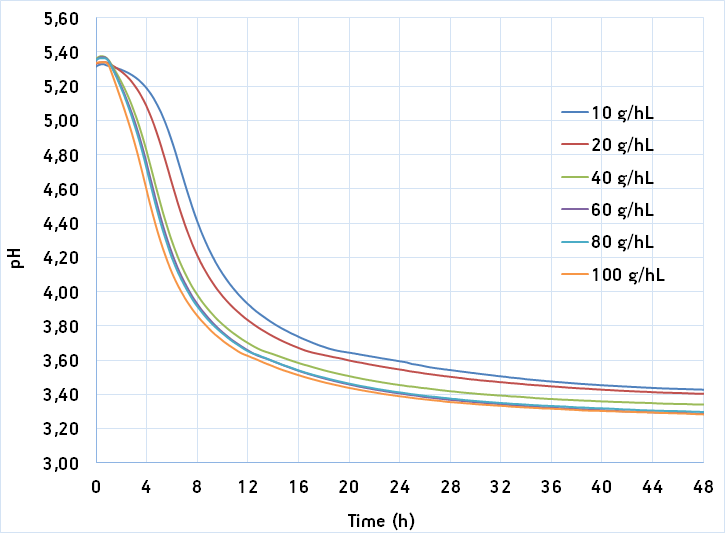 To characterize the organoleptic profile of beverages, Fermentis has created an expert sensory panel. The panel aims to function as an instrument able to objectively and statistically assess and characterize each beverage manufactured with Fermentis solutions and recommendations. Fermentis panel consists of 40 internal panelists from different sectors and activities within Lesaffre. The group was selected based on the analysis of their motivation, availability, consumption habits and health conditions. On a voluntary basis, since May 2017, during one hour per week, the panel performs sensory trainings and tests to differentiate and describe sensory attributes in beer. Up to date, they have been trained on 45 beer attributes and have performed a set of exercises for a panel profiling and performance. 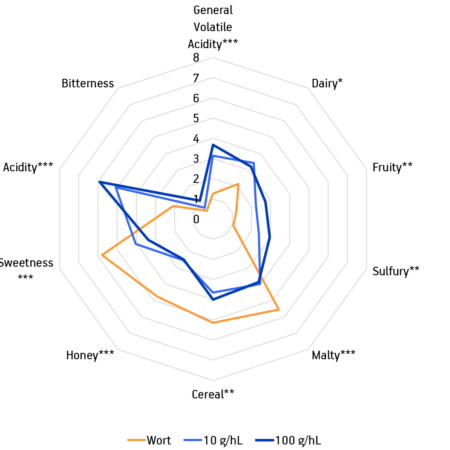 A 12°P unhopped wort was acidified with a dosing rate of 10 gr/hL and 100 gr/hL respectively; with SafSour™ LP 652. In parallel, an identical wort was not acidified in order to evaluate blindly the aromatic impact of lactic fermentation of the two acidified worts. Then descriptors were considered by the taste panel to evaluate this.

Clearly, the figure on the left shows that kettle souring with SafSour™ LP 652 is significantly impacting the organoleptic profile. As expected, it increases acidity and more generally volatile acidity, but also decreases the global maltiness of the beer flavor [cereal, honey and sweetness perception].

In addition, the dairy as well as the fruitiness perception increases. The fruity characters described by the panelists were tropical [mango, passionfruit] and citric [lemon, grapefruit] notes. However, the differences between 10 and 100 gr/hL dosage rates of SafSour™ LP 652 were not significant. So, increasing the pitching rate will definitely reduce the final pH and the acidification time but will not have an organoleptic impact on your final beer.

Interested in brewing a sour beer? Discover more about our SafSour™ LP 652 and all other Fermentis products by visiting the website [www.fermentis.com] or by downloading the Fermentis App available on App Store and Android. It’s free and full of tools!